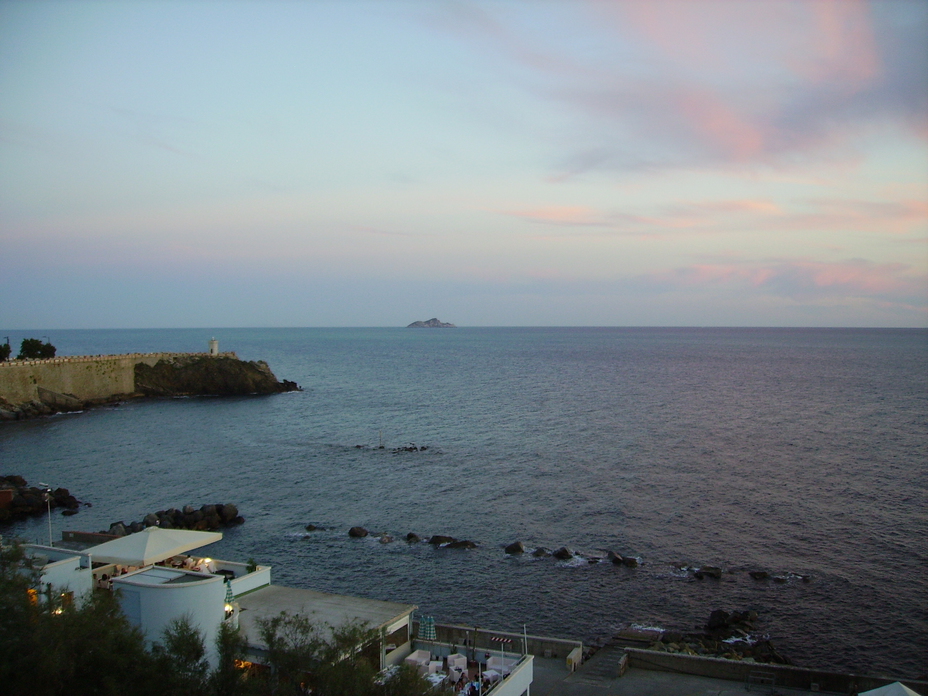 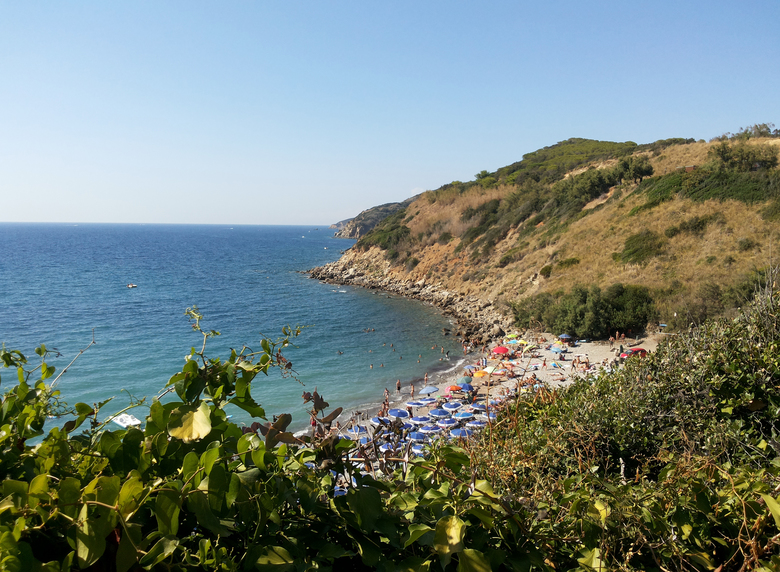 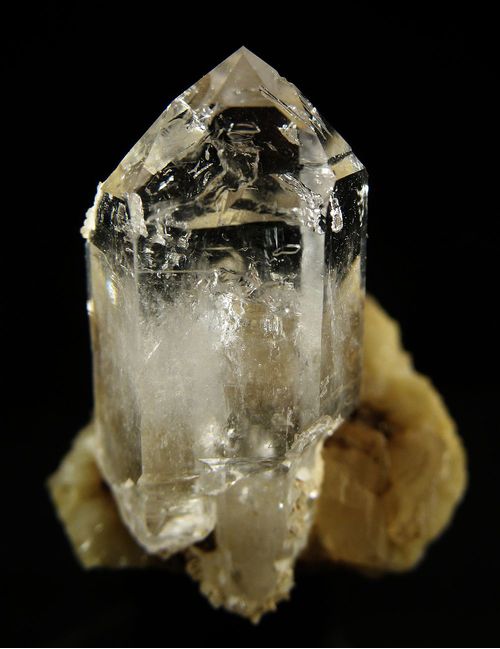 
Piombino Promontory is a peninsula, having the Gulf of Baratti on the north and the Gulf of Follonica to the south. On the west it is separated from Elba Island by the Strait of Piombino (Channel of Piombino). It consists of a continuous ridge of low hills with four main summits (Monte Massoncello, 286 m; Poggio Grosso, 274 m; Poggio Gigante, 263 m; Monte Pecorino, 254 m), falling into the sea with steep cliffs along the northern and the western coasts; to the south, the hills gently slope down to form a narrow plain where the town of Piombino lays; to the east, a few hills separate from the main ridge and slope to the the wide alluvial plain of the Cornia River. The main geological feature of the Promontory is represented by the sedimentary rocks of the Macigno formation of the Tuscan Nappe (Eocene-Oligocene), which practically forms all the hilly and the coastal zone, excluding the southern sector. Ligurian and Sub-Ligurian formations overlay the main formation: limestones and marls around Poggio dell'Agnello, SE and E of the Gulf of Baratti; clay-schists, limestones, and calcarenites along the southern coast around the town of Piombino. Furthermore, two ophiolitic masses of Late Jurassic age (Punta Falcone pillow lavas and Fanale della Rocchetta diabase). Other minor formations are present: Quaternary clayish-sandy soils, blending hills into plains; Quaternary conglomerate plates; two small travertine occurrences (Olocene). No mineral resources are present in the Promontory; the abundant metallurgical slags that characterised the famous Baratti slag locality, to the east of the ancient town of Populonia, are the result of Eutruscan and Roman smelting of ores from Elba Island and Campigliese.

Most of the Piombino Promontory consists of rocks of the Macigno formation, which is litologically characterised by prevailing sandstones and minor pelites, with subordinate chaotic deposits. It is mainly made up of medium-coarse grain size and medium-thick bedded sandstones, with presence of thin-bedded turbidits, mainly in the lower and upper portions. These rocks, that are grey when fresh and yellowish to brown when exposed, are thickly crossed in many places by quartz and carbonate veins.
Dolomite is the most common mineral and forms veins and veinlets crossing all the coastal rocks, sometimes enlarging to cavities to even 15 cm with whitish to yellow-brown saddle-like crystal aggregates, up to 2 cm in size. Dolomite is a late-stage mineral but rarely the inverse crystallisation sequence has been observed with small crystals of pyrrhotite and quartz perched on dolomite crystals.
Quartz is abundant in the coastal sandstones and somestimes forms oustanding specimens. In the Spiaggia Lunga area it appears as short transparent crystals with calcite. Along the coast between Spiaggia Lunga and Buca delle Fate it often forms radiating aggregates of flattened transparent crystals in association with pale sky-blue quartzy crusts, chalcedony balls, and tabular baryte. Along the northern coast, between Buca delle Fate and the Gulf of Baratti, it occurs as very nice, elongated hyaline crystals, up to 3 cm in length, inside the dolomite veins; sceptres or crystals with gaseous inclusions are sometimes found. Associated minerals are rhombohedral calcite, saddle-like dolomite, and tabular pyrrhotite.
Pyrrhotite is the most interesting mineral, only found however in a restricted area along the northern coast between Buca delle Fate and the Gulf of Baratti. It occurs in carbonate veins and rarely in cavity as tabular hexagonal crystals, up to 3 cm large and 3 mm thick, in association with quartz and dolomite. The presence of pyrrhotite in rocks formations of this kind is unusual, beign this mineral typical of high-temperature deposits, and may be related to extremely reducing conditions.
Calcite is very common as usually discordant veins. Inside the cavity it forms white to yellowish flattened rhombohedra up to 3-4 cm. It is the last mineral that precipitated in the paragenetic sequence, hence covering dolomite, quartz, baryte, and iron sulfides. Stalactitic and concretionary calcite is also present in various areas of the Promontory.
Baryte, as colourless to white tabular crystals to 2 cm, is rather common along the coast between Spiaggia Lunga and Buca delle Fate. It is always associated with calcite and/or dolomite, often with quartz and iron sulfides.
Aragonite has been very rarely found in cavities to the north of Spiaggia Lunga, where appears as white-yellowish, prismatic twinned crystals, closely associated (and partly included) with calcite.
Marcasite is not common and appears as single pseudocubic crystals or in globulr aggregates; pyrite has been rarely found as micro cubic crystals embedded in calcite rhombohedra.

Clay-schists and limestones crop out along the southern coast and, rarely, as small plates in the Macigno formation. Clay-schists are dark grey to black, intercalated with pale grey hard limestones, marly-siliceous limestones, and minor calcarenites. Layering is often disturbed and chaotic, and thickly crossed by secundary calcite veins; calcite, quartz, and minor globular pyrite are the main minerals. Calcite is particularly abundant at Punta Batteria and along the coasts around the town of Piombino. Furthermore, marcasite, as microcrystalline, fibrous radiating globular aggregates to 4 mm (always more or less altered to dark brown iron hydroxides) is sometimes found inside limestones and calcarenites. Small, milky-white tabular crystals of baryte have been rarely found in the marly limestones outcropping to the north of Cala Moresca towards Spiaggia Lunga.