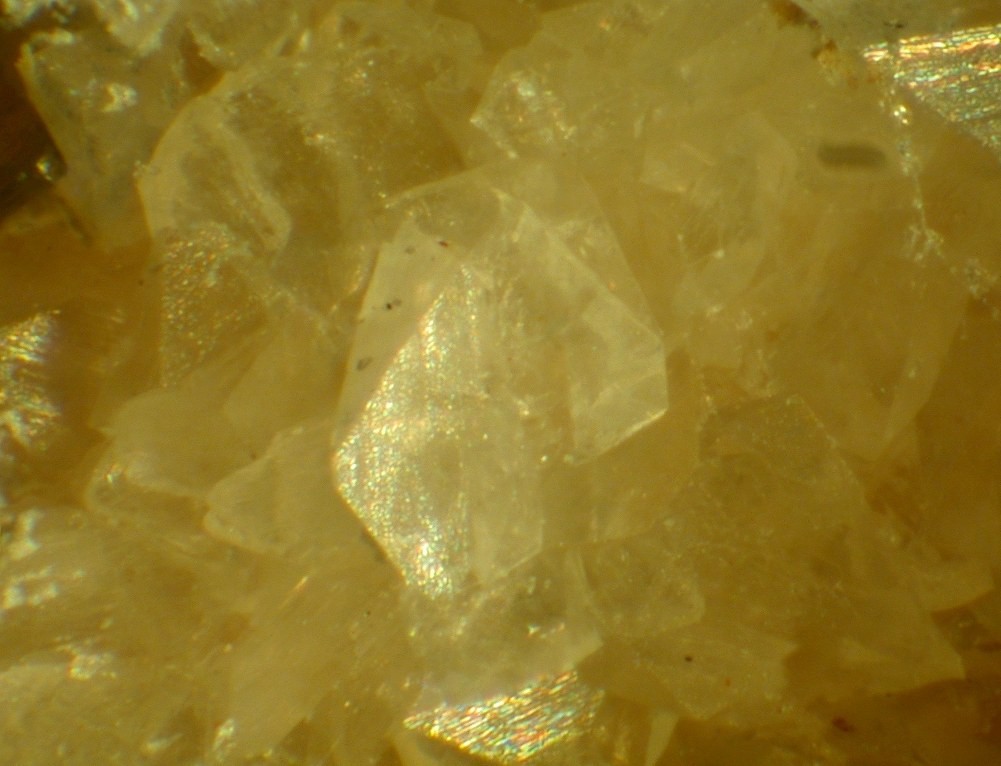 ENVIRONMENT: Middle Buttes is an isolated group of low hills in the Mojave Desert southeast of the Tehachapi Mountains. It is within a broad alluvial plain punctuated by buttes and isolated mountains. Vegetation is a typical high-desert xerophytic assemblage of creosote, Joshua trees, sagebrush, and grasses. The climate is arid with a mean annual precipitation of less than 20 cm. The annual temperature ranges from -1° C during the winter to over 40°C during the summer; the mean annual temperature is 19°C. The region is sparsely populated.

HISTORY: Gold was discovered at Middle Buttes in 1934 initially on the eastern side of the buttes at the Trent and Burton-Brite-Blank Mines. Later that year, gold was discovered at the Cactus Queen Mine. By 1936, a 1,000 foot 45 degree inclined shaft was sunk at the Cactus Queen, which produced 125 tons/day of ore. All mines were closed in 1942 by the War Production Board. Activity commenced for a short time during the 1950's at the Cactus Queen Mine by the Burton Cactus Mines Company. Ore was processed at nearby Tropico Hill until 1956 when the mine was closed. In 1979, the Congdon & Carey Partnership (later CoCa Mines, Inc.) initiated a reconnaissance campaign at Middle Buttes. In 1980, an 11-hole diamond drilling program resulted in discovery of the Winkler ore body, which was initially estimated to contain 200,000 tons of 0.200 ounce/ton ore. Open-pit mining of this body began in 1986. Subsequent exploration and drilling defined reserves at the Ella, Trent, and Alunite ore bodies in 1987 and 1988. Also during this period, drilling defined reserves at the Shumake and Silver Prince ore bodies, and mining began in 1988 at the Shumake, the largest of the entire group. Gold recovery at the Middle Butte (eastern) operations, which included the Trent, Ella, Alunite, and Winkler, utilized heap leaching with a Merrill-Crowe system rinse. The final ore at this facility was processed in 1991. Gold recovery at the Shumake (western) operations, which included the Shumake and Silver Prince ore bodies, utilized heap leaching with an activated carbon system. Active mining at all sites ceased in 1992. Heap-leaching of stockpiled ore at the Shumake operation continued until 1996. As of 2001, it appeared that the property was still being decommissioned.

ORE EMPLACEMENT CONTROLS: The Blue Eagle-Cactus Queen vein and Shumake vein were the dominant pathways for metalliferous hydrothermal fluids. The Blue Eagle-Cactus Queen vein formed along a fault between the granitic basement rock and the volcanic dome complex. The Au-Ag-bearing fluids migrated through dilatant fault zones during episodic movements associated with regional tectonism. Repeated rupture-rehealing events, without boiling, are interpreted as having created secondary zones of permeability. These zones were the sites of stockworks composed of quartz-adularia-sericite. Alunite is an important guide to ore, although it is rare in the Shumake ore body.

GEOLOGY AT MIDDLE BUTTES DEPOSIT: Middle Buttes is a volcanic complex composed of a series of overlapping and coalescing flows and lava domes interbedded with vent breccias and pyroclastic flows of quartz latite to rhyolite composition (Blaske and others, 1991). The complex was erupted upon Cretaceous quartz monzonite basement rocks similar to the granitic rocks of the southern Sierra Nevada Batholith exposed to the north. The age of the complex is interpreted to be between 16.9 ? 0.7 Ma and 21.5 ? 0.8 Ma based on correlation with similar rock sequences at nearby Soledad Mountain (Blaske and others, 1991). There are two areas of Middle Buttes that differ in both types of alteration and mode of occurrence. On the east side is the Middle Butte Mine area. On the west side is the Cactus Queen-Shumake area. The Middle Buttes MIne area includes the Winkler, Ella, Trent, and Crescent-Alunite ore bodies. These bodies are associated with NW-trending, east-dipping epithermal quartz veins up to 5 feet thick as emplaced within the flow-dome complex. The veins are situated at the intersection of NE- and NW-trending faults. They are also enveloped by locally intense, pervasive advance argillic alteration, which mainly consists of alunite and kaolinite. The Cactus Queen-Shumake area includes the Shumake and Silver Prince ore bodies. The Shumake body is at the contact between quartz monzonite basement and a vent breccia facies of the volcanic dome complex. It comprises the lower contact of Cactus vein, which strikes N45E and dips 30SE, and the higher Shumake vein, which strikes N70E and dips 20-70NW. Both veins are 2-5 meters thick. The Shumake vein is strongly fractured and has massive, granular, interlocking quartz. The deposit also has an intermediate zone of vuggy stockworks that consist of quartz-adularia-sericite. The stockwork veinlets are several tens of microns to 10 mm thick. The basement rocks are propylitically altered to chlorite-pyrite-sericite. Sericite (muscovite-illite) alteration is also present both in the basement immediately below the Cactus vein and as massive 5-m pods that envelop the thick quartz veins. The Shumake body differs from the other ore bodies, which are characterized by alteration assemblages of alunite, kaolinite, and silicification (Blaske and others, 1991). Hypogene alunite from altered pyroclastic rocks in the deposit yielded a K-Ar age of 18.36 ? 0.55 Ma (Bottaro, 1987).

Middle Buttes is composed of a rhyolite to quartz latite flow-dome complex that was intruded into and erupted upon Mesozoic quartz monzonite basement during the early Miocene. Some workers believed that Middle Buttes is on the northwest rim of a ring-fracture zone associated with a caldera (Burnett and Brady, 1990). Overlapping with the Miocene volcanism at Middle Buttes were episodes of fracturing and hydrothermal alteration that resulted in gold and silver mineralization. Hypogene alunite from the altered pyroclastic rocks yielded a K-Ar age of 18.36 ? 0.55 Ma. In brief, gold and silver ores occur within massive and brecciated epithermal quartz veins that follow NW- and NE-trending faults, and intersections thereof. They are also along basement contact zones associated with advanced argillic alteration and potassic alteration contemporaneous with the Miocene volcanism. Nearly all of the rocks at Middle Buttes have been hydrothermally altered. The alteration assemblages are zoned. The Shumake ore body contains mercury, arsenic, and antimony (Blaske and others, 1991), which are indicative of epithermal conditions.

GEOLOGIC STRUCTURES: Regional geologic structures include the San Andreas Fault and the Garlock Fault. Local structures include both NE- and NW-trending normal faults that cut the volcanic-dome complex and are significant in their control of the district's ore bodies. Most important are the NE-trending Blue Eagle-Cactus Queen fault in the western area and an unnamed NW-trending fault in the eastern area. The Blue Eagle-Cactus Queen fault was traceable for several thousand feet.

Early exploitation of the gold and silver ore bodies at Middle Buttes was through standard underground workings (shafts, adits, drifts, and crosscuts), which cumulatively amounted to many thousand feet at several mines. Of greatest extent were those at the Cactus Queen Mine, the most productive property in Middle Buttes. Other significant workings were on the eastern side of Middle Buttes at the Middle Butte Mine. During the modern era of gold mining in California, the ore bodies at Middle Buttes were exploited through open-pit, heap-leach mining techniques. In the late 1980's and early 1990's, the mining operations consisted of one large open pit (Shumake) and several smaller ones (Silver Prince, Winkler, Alunite, Ella and Trent). The Shumake pit reached a depth of 640 feet below the ground surface. It eventually merged with the Silver Prince pit to form a single pit about 1,300 feet wide and 2,500 feet long.

North America PlateTectonic Plate
This page contains all mineral locality references listed on mindat.org. This does not claim to be a complete list. If you know of more minerals from this site, please register so you can add to our database. This locality information is for reference purposes only. You should never attempt to visit any sites listed in mindat.org without first ensuring that you have the permission of the land and/or mineral rights holders for access and that you are aware of all safety precautions necessary.
Quick NavTopCommoditiesMineral ListReferencesOther DatabasesLocalities in RegionOther Regions
版权所有© mindat.org1993年至2020年，除了规定的地方。 Mindat.org全赖于全球数千个以上成员和支持者们的参与。
隐私政策 - 条款和条款细则 - 联络我们 Current server date and time: 2020.9.19 01:54:00 Page generated: 2019.12.22 10:46:52
Go to top of page