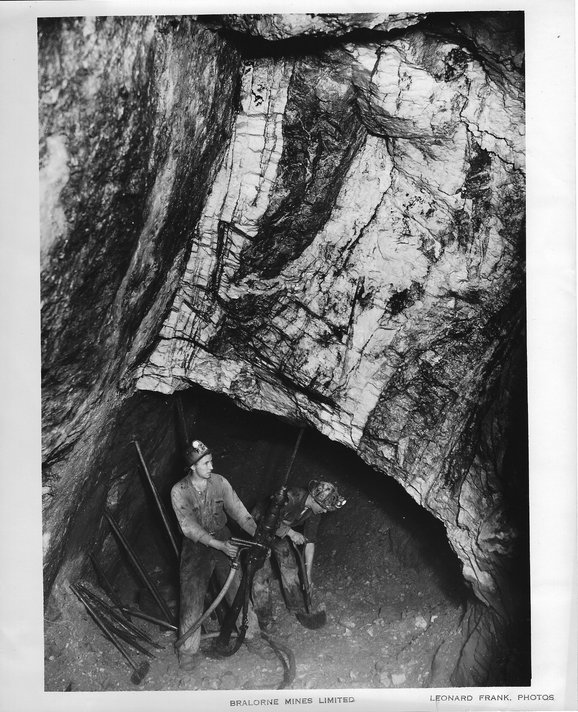 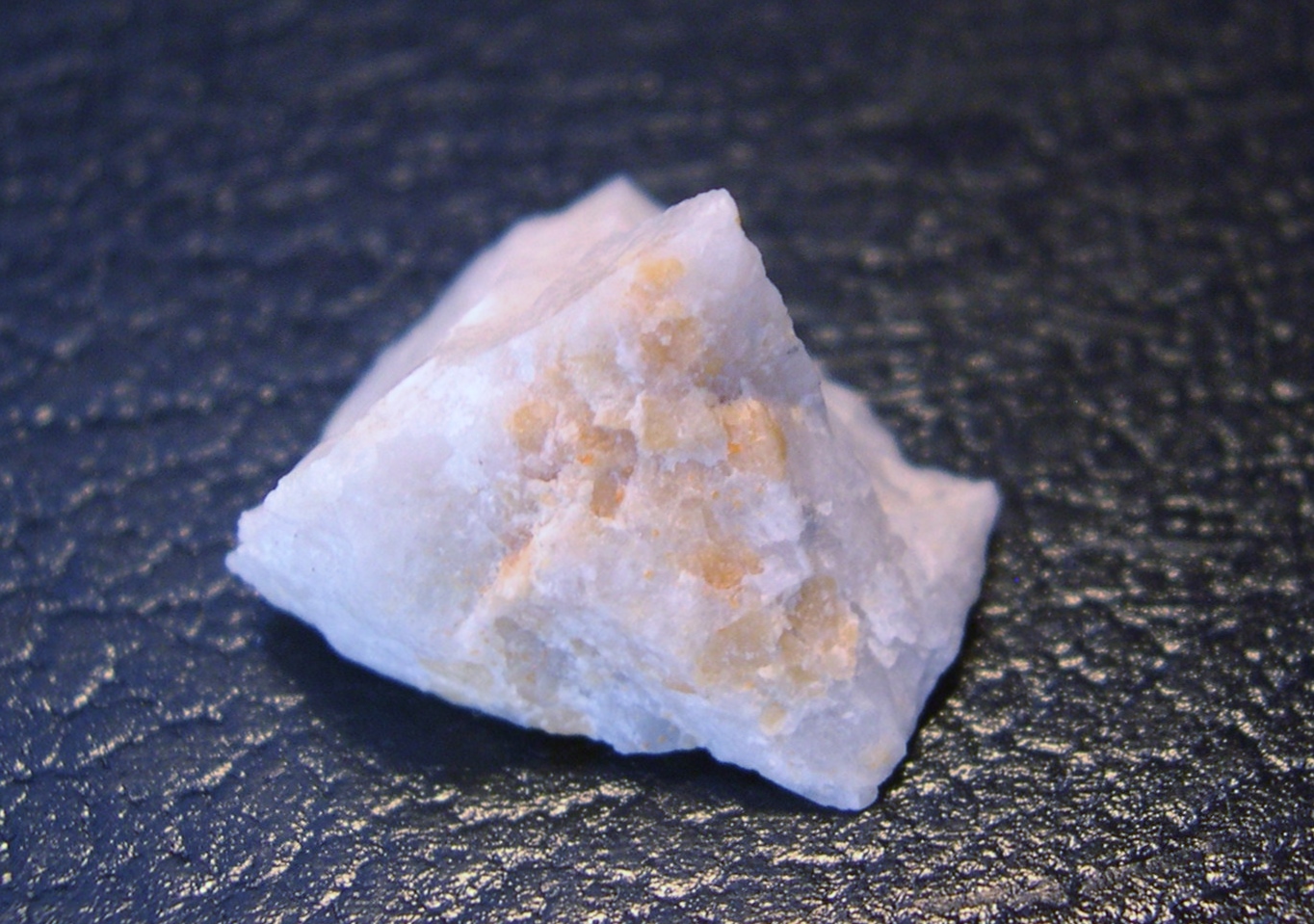 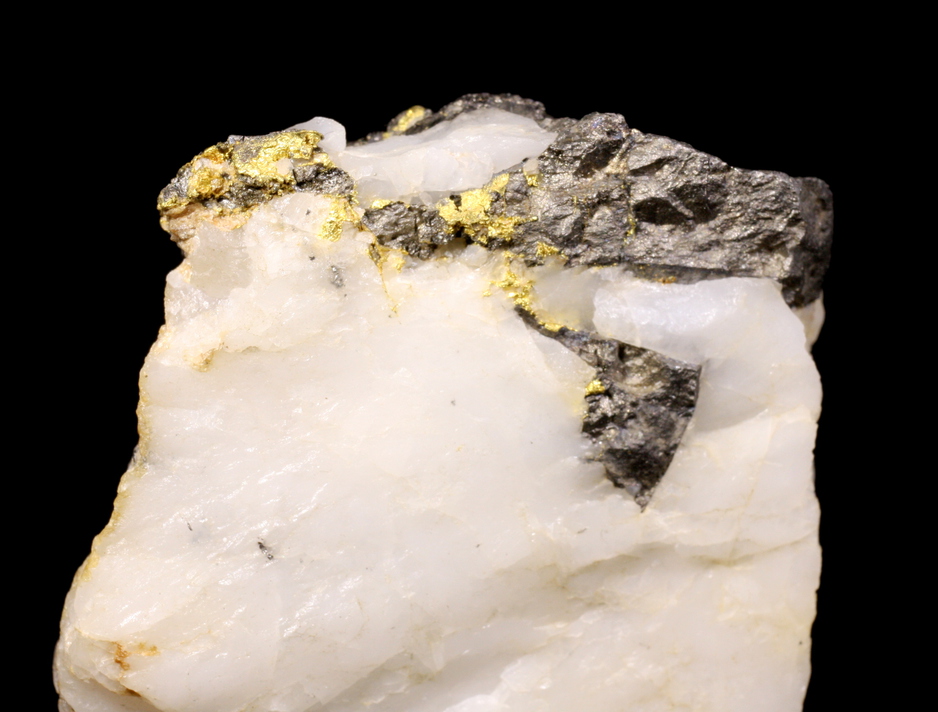 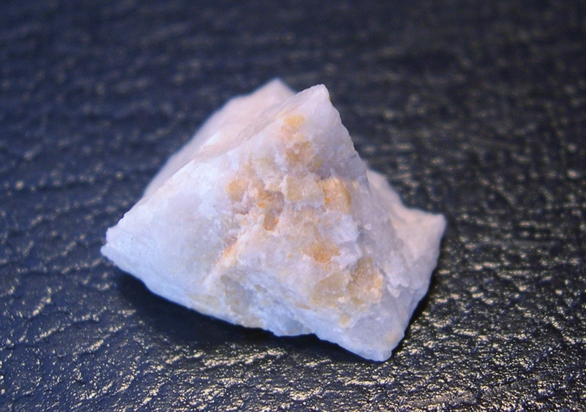 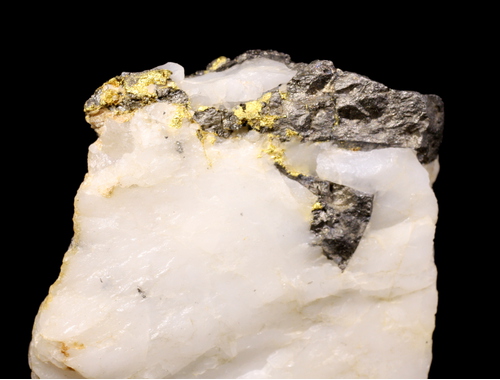 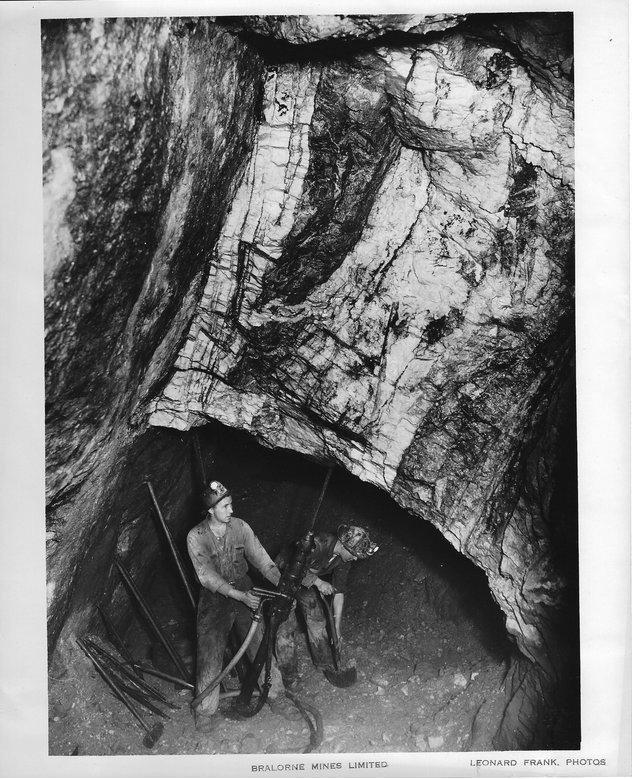 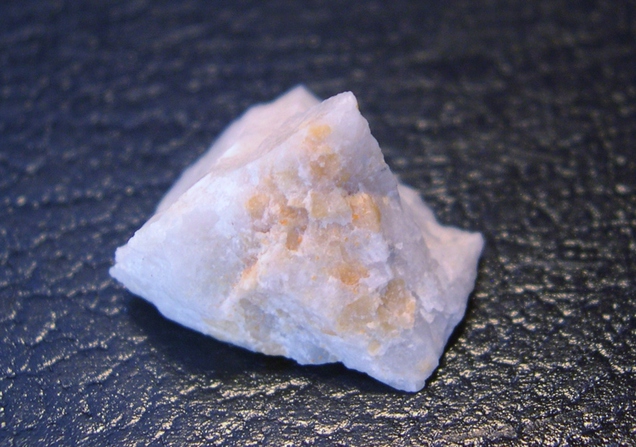 Most of the claims in the Bralorne-Pioneer mine camp were staked in 1897. The Pioneer mine began in 1900 as a one-man operation, when F. W. Kinder single-handedly mined and processed the ore at a rate of 400-500 pounds per day. He continued his operation, making a comfortable living, for eleven years before selling the property. The mine became a major producer of gold when Dave Sloan, a mining engineer, came on board as managing director in 1924. Within four years the recovery of gold had reached more than $100,000 of bullion per year (Cairnes 1937).
Gold and sulfide mineralization (pyrite, arsenopyrite, sphalerite, galena, chalcopyrite, pyrrhotite, and tetrahedrite) occurs in epigenetic mesothermal quartz-carbonate veins hosted in serpentinite and diorite.
Most surviving specimen material consists of “sponge” gold frozen in quartz matrix, some in sulfide matrix. Good representative specimens of this type reside in the collections of the Royal Ontario Museum, the Provincial Museum of Alberta, and the University of British Columbia. The Braelorne mine closed in 1971. A number of large specimens were rediscovered in an office filing cabinet after a company take-over in the late 1980s. In 1990 Braelorne Resources sold these specimens of sponge gold in quartz to Rod Tyson and Frank Melanson. They etched them and produced 15 specimens ranging from 4x3 cm to 12 x 20 cm (Robinson and King 1990).
Well-crystallized gold is reported to have been encountered in carbonate quartz veins during operations in the 1930s and 1940s (Rod Tyson, pers. comm., 2005). One significant surviving specimen of this era is in the collection of the Canadian Museum of Nature. Another was sold at a Sotheby’s auction in Toronto in 1988. The following is from the Sotheby’s auction catalog 84 (1988):
"A Spectacular Gold Specimen, of self-supporting dendritic and platy gold veinlets with arsenopyrite crystals etched from a calcite vein in a calcite and grey rock matrix, the specimen mounted in plaster and housed within a wood and glass display case, length 5 in. (12.7 cm.), height 2 3A in. (7.0 cm.), width 4 in. (10.2 cm.).
This gold specimen originates from the Pioneer Gold Mines property near Lillooet, located approximately 100 miles north of Vancouver. It was acquired in the 1930’s by Colonel J.V.N. Spencer, the proprietor of the mine.
Provenance: Private Collection, British Columbia."

A specimen exhibiting reasonably developed gold micro-crystals in vugs in massive quartz is also known from the Coronation mine, which was eventually incorporated into the operations of the Bralorne mine. The gold crystals are rounded and complex, appearing to exhibit a highly modified tetrahexahedral form.